We want to recognize and congratulate the VA on their continued success with the MyHealtheVet project, surpassing an amazing 5 million users this year!

“My HealtheVet is a shining example of how Veterans can play a more active role in their health care journey.” VA Secretary Robert Wilkie said about the accomplishment. “VA is committed to providing the necessary technologies to ensure that Veterans receive care when and where they need it.”

DynaTouch’s MHV Express™ Kiosks helped the VA achieve this major milestone by providing patients with secure access to the website over 4.5 million times, just in the last two years! The first MHV Express kiosks were acquired by the VA in 2010 to increase awareness of and enrollment in the portal at the point-of-care, and to encourage patients to opt in to Secure Messaging. The kiosks feature a user-friendly interface with rich graphics that entice Veterans to engage, and large button selections that make it fast and easy for them to do so. 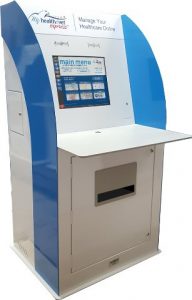 The very first MHV Express kiosks installed were the standard upright model that DynaTouch uses for most of its TIPS eGov Kiosk™ solutions. TIPS eGov Kiosks are configured with a privacy filter, printer, rugged keyboard and trackball. After receiving a great deal of feedback from the Veterans using the systems in the early days, DynaTouch designed a sit-down kiosk configured with a standard keyboard and mouse, so Veterans could be as comfortable as possible navigating and interacting with the portal. The sit-down model soon became the VA’s most popular form factor. However, several VA facilities still prefer the upright kiosk. And some prefer a countertop kiosk due to limited floor space, or tablet kiosks for portability. All DynaTouch kiosks are powered by TIPS Kiosk Management Software, which is on the VA’s approved list of software due to its robust security features and ADA/HIPAA compliance.

Read more about the accomplishments of the MHV program in their press release.

Learn more about DynaTouch’s work with the VA. 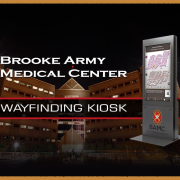 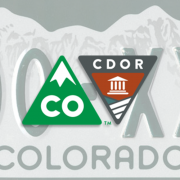 Celebrating 1,000,000 Check-ins on QueueKiosk… and Counting! 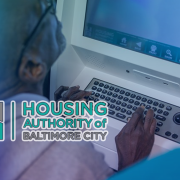 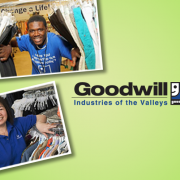 Tweets by DynaTouch
Kiosks Help Sustain the VA’s Vision that “No Veteran Ever Dies&...